Dear friends,
The guitar, with all its rich facets of form, tone and design continues to fascinate the players, collectors and builders of today, as it has since the Moorish traditions of 12th century Andalusia.

10 continuous generations of the Voigt family have been building fine instruments, and the name is long connected to the history of the guitar. 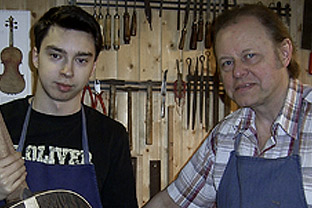 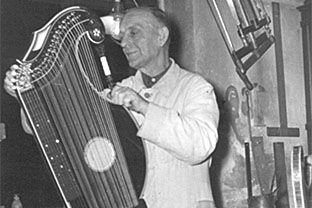 Discover the world of Voigt Luthiers. 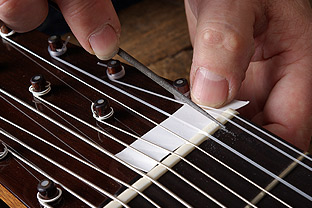 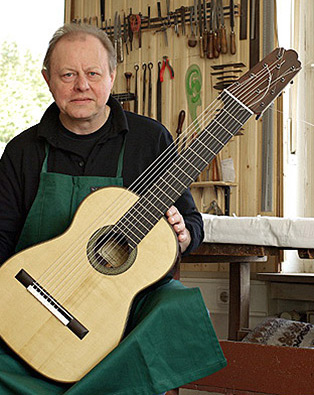 Curt Claus Voigt began his apprenticeship in Mark Neukirchen, at the company Marma, Karl Bauer KG, a small factory in of 8-10 guitar makers, which manufactured in almost all types of guitars, including classical, jazz, and Hawaiian, as well as electric guitars and basses, mandolins and banjos. He also trained with his grandfather, Kurt Voigt, and father Günter Voigt, and with the master violin maker Hans Zölch to deepen his understanding of the historical instrument. Curt Claus passed his master’s examination in 1980 and began freelance work as a restorer of historical plucked instruments for museums and private collectors (Grassi Museum Leipzig, Erfurt Anger Museum, City Museum Meiningen; Volkskundemuseum Teodone, Brunico, South Tyrol and others). In 1988 he took over the company Kurt Voigt & Son from his father and moved to Wasserburg am Inn, Upper Bavaria. Curt Claus continued his education through workshops with Jose Romanillos (in 1991 and 1994) and with numerous studies of historic instruments in museums and private collections throughout France, England, Czech Republic, Austria, Italy and Spain.

Marc-Julian Voigt began training as a luthier with his father Curt Claus Voigt in 2006. He successfully completed his studies at the Fachschule für Instrumentenbau (College for Instrument Making) in Mittenwald in 2009. In 2010 he studied with Wolfgang Früh in Paris where he learned restoration of historic guitars and lutes. Today Marc-Julian works independently in his father’s workshop. 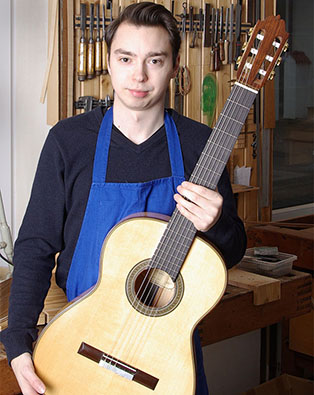 In 1690, when Adam Voigt began an apprenticeship as a violin maker in the former Neukirchen, and after many years of training and travel successfully completed a master’s examination and entered the violin makers guild, he could scarcely have guessed he was establishing a family dynasty which continues to this day. Since Adam, the Voigt family dynasty has included over 100 string, woodwind and brass instrument makers, as well as bow makers, string manufacturers and musical instrument dealers.

I represent the ninth generation of this family line, and with my son, Marc-Julian Voigt as the tenth, the Voigt company is now one of the world’s oldest musical instrument building workshops. Tradition, experience and knowledge have been passed on for centuries, from generation to generation.

The Voigt family has its origins in northern Bohemia with a Nickl Voigt mentioned in local records in 1534. Even in the relatively early years of the settlement of Eger in the former Neukirchen in Vogtland, we find Adam, the first Voigt violin maker.

Adam I. Voigt (1674-1737)
Adam‘s apprenticeship as a violin maker is likely began between 1688 and 1690 . On August 9, 1699, after years of training and travel, Adam passed the master exam and acquired membership in the Neukirchen guild of violin makers. Adam I. Voigt is considered the forefather of the Voigt family dynasty.

We gain interesting insight into the variety of guitar models made in the Markneukirchner workshop through the account books of the violin maker Johann Friedrich Voigt (1756-1826), which he kept from 1816 – 1828. In 1820, J. F. Voigt lists twelve different guitars available in different price ranges. In 1821 he lists instruments with “ screws” (heads) or with “hidden screw” (Viennese action) for the first time. The 1826 book includes terz as well as 13- and 14- string guitars.

The oldest guitar that is in our family collection was made shortly after this era. It is a well-preserved instrument of Frederick Augustus Voigt “Guitarren-Fabricant”, Mark Neukirchen, Saxony, 1850.

As the demand for guitars, lutes, zithers and other plucked instruments grew, my great-grandfather, Oskar Voigt (1853-1944) began teaching plucked instrument construction in 1867. On December 10, 1876 he registered his workshop as a “zither maker”. This date is now considered the founding date of the Masters Workshop for Zither Making, Oskar Voigt, Mark Neukirchen, Saxony.

Between 1888 and 1890 Oskar made his home and office at Schützenstraße 580. His four sons all learned their craft from him before studying at leading workshops in southern Germany and Austria, including in Munich with August Seith, Max Amberger, Halbmaier and Hauser.
While sons Oskar Enno Voigt (1879-1969) and Kurt Walter Voigt (1892-1972) remained faithful to zither amking, Arno Voigt (1881-1963) and brother Oskar Walter Voigt (1883-1958) specialized in guitar.

My grandfather, Kurt Voigt took over the workshop from his father Oskar in 1930 and led it, with worldwide acclaim, until 1968. He was joined in the workshop by his son (and my father) Günter Voigt (1926-1996), when my father passed the master’s examination in 1952.

You will find more photos in the gallery. 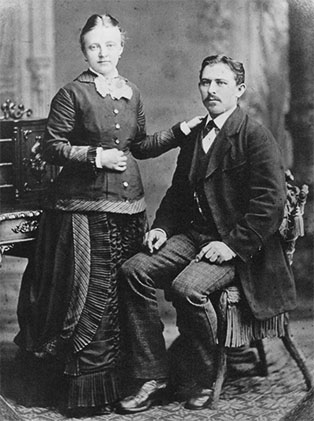 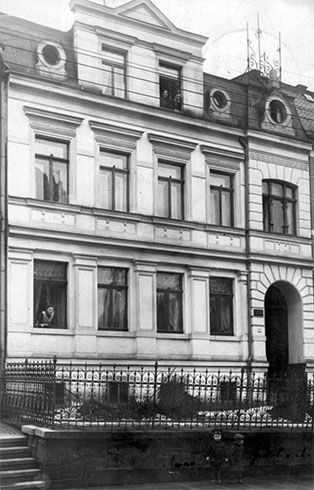 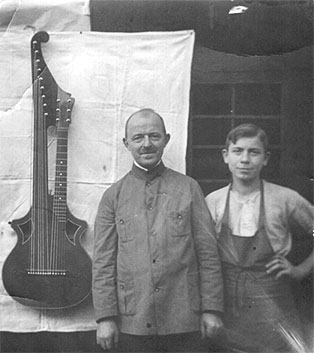 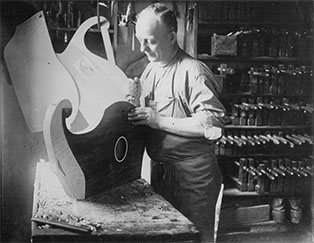 Impressions from our workshop

Headstock:
Reworking the six holes in the headstock with a reamer so that the tuning machine can be properly mounted. In addition to our custom built Voigt Antique Style tuning machines, we also use tuners by Scheller, Rodgers, Alessi and Fustero. 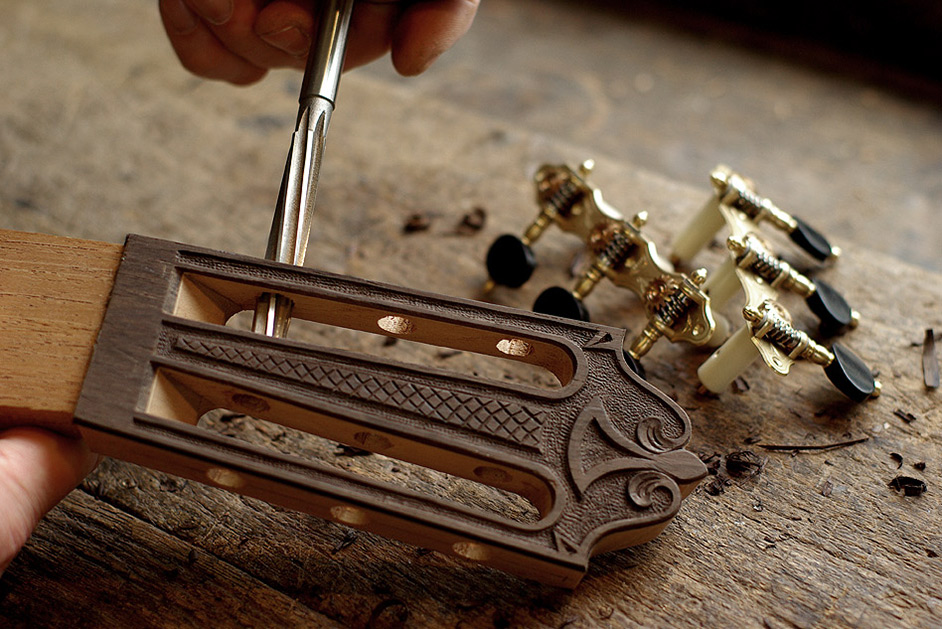 French polish:
The French polish is applied in a circular motion, using a lint-free cloth soaked in alcohol, shellac and pumice. After the polish has dried for 24 hours (although drying time can vary greatly according to humidity and temperature) a second layer is applied. It will take up to 10 layers for the instrument to be fully varnished. 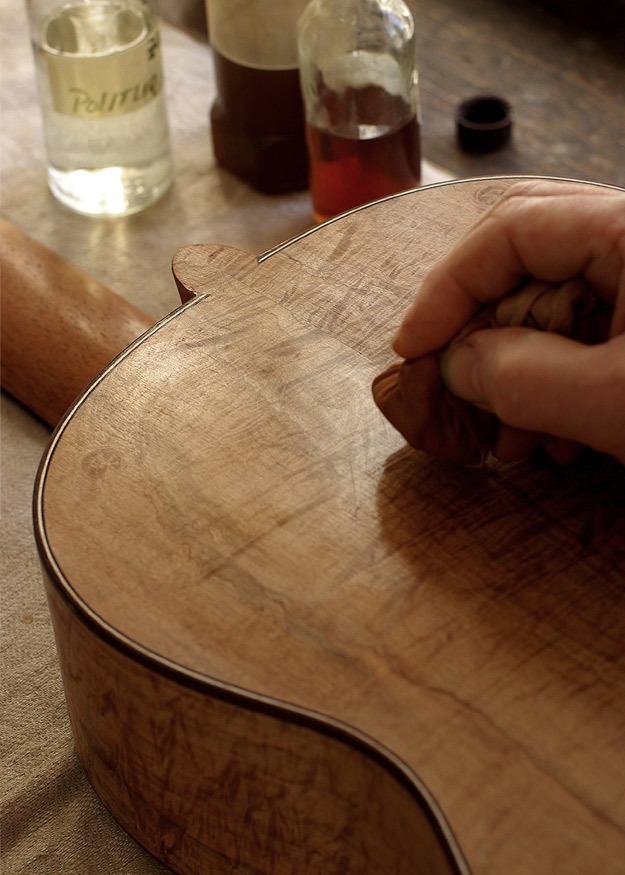 Guitar Back:
Following the old Spanish guitar building school, the back braces are inserted and glued into the sides. The braces are then planed by hand, as shown in the photo. The back is then pressed on and glued. Spruce, mahogany and cedar are typical wood for back braces. The number varies between three and four, depending on the model. The Espressivo model has no back braces, since the stability is provided by the curvature. 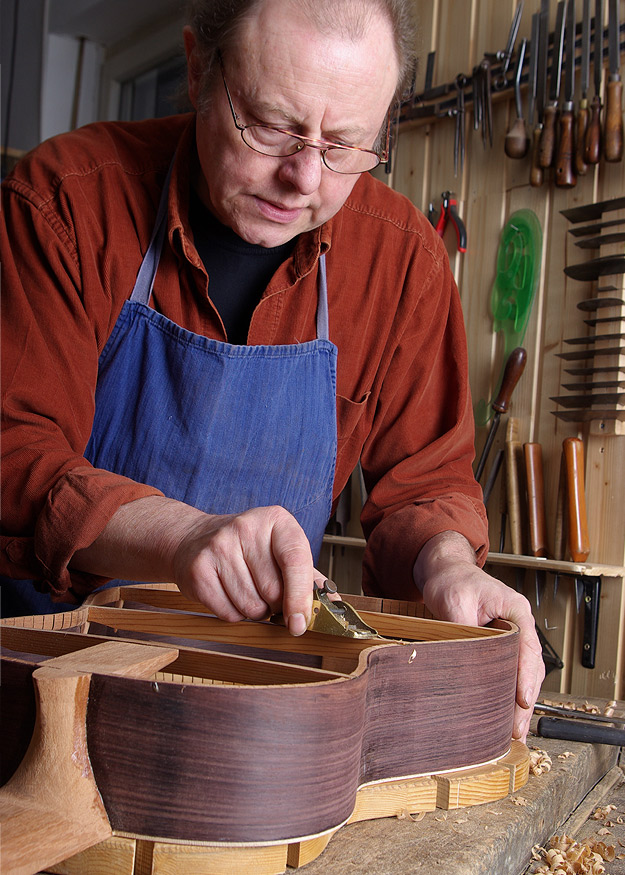 Binding & Purfling:
A cord wrap is used to ensure that the curved binding of the rosewood or maple purfling is tight against the body. It is usually necessary to perform this winding process four times on each guitar. 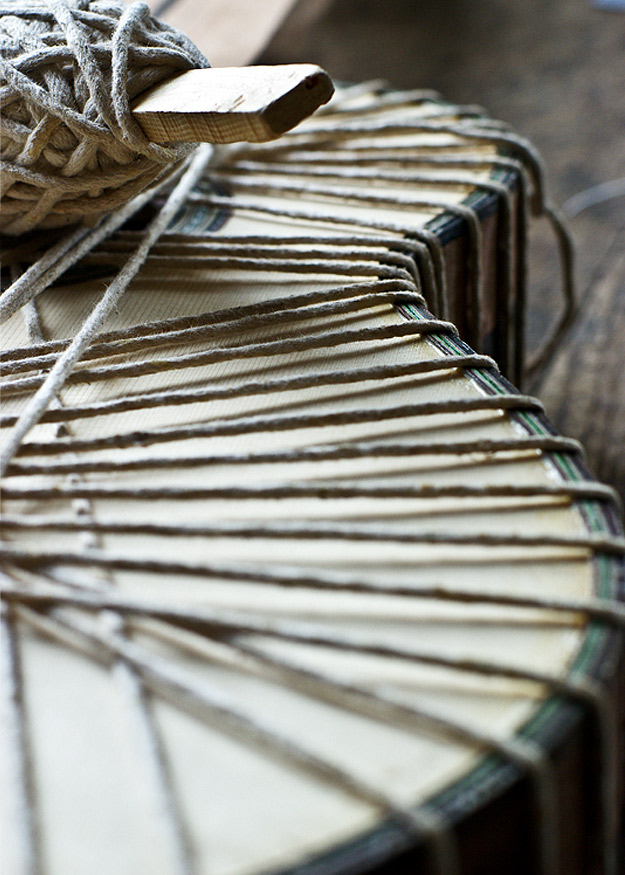